Presented as part of Parajanov, with Sarkis exhibition, Pera Film’s Rebel Images: Sergey Parajanov is a collection of the director’s films given form by his unbridled imagination and documentaries that showcase the testimonies of artists who have been inspired by Parajanov’s work. Named a “genius”, a “master”, and a “magician” by Tarkovsky, Godard, Fellini, Antonioni and other renowned directors of the history of cinema, Sergey Parajanov, after his incarceration in 1974 for his dissident views and sexual orientation, revealed the unconstrainable nature of images with his art that reached beyond walls, proving once again his mastery of poetical cinema.

The program includes Andriesh, Parajanov‘s first surviving film, an expanded version of his lost student film The Moldavian Tale; The First Lad, a romantic comedy made under the guidance of Alexander Dovzhenko and set in the immense fields of Ukraine; Ukrainian Rhapsody, a melodrama wrapped in the ideological garb of the time; Flower on the Stone, a film centering on a clash between the political establishment and a religious cult which infiltrates the community; Shadows of Forgotten Ancestors, the film that won Parajanov international acclaim with the vibrance of its costumes and colors; Hakob Hovnatanyan,an overview of the portrait painting of the man called “the Raphael of Tiflis”, Hakob Hovnatanyan; The Color of Pomegranates, the life of Armenian ashik Sayat-Nova told through images from the director’s own imagination, widely regarded as one of the greatest masterpieces of the 20th century; The Legend of Suram Fortress, a retelling of an archaic Soviet-Georgian folk-tale; Arabesques on the Pirosmani Theme, a personal view of the director on the spectacular heritage of Georgian primitivist painter Niko Pirosmani; Ashik Kerib, Parajanov’s last completed film and an adaptation of a short story by Mikhail Lermontov dedicated to Andrei Tarkovsky; as well as The Seasons, which is considered to be one of the three most important documentary films made in Armenia along with Hakob Hovnatanyan, directed by Artavazd Peleshian, whom Parajanov referred to as "one of the few authentic geniuses in the world of cinema"; Parajanov: A Requiem by Ron Holloway, an affectionate and insightful look at the tumultuous career of Parajanov and featuring the famed director’s reflections on his own films; and lastly, Sergey Parajanov: The Rebel by Patrick Cazals, a documentary that focuses on the collages Parajanov produced during his years in prison, featuring interviews with artists, including Sarkis himself, academics, and actors, complete with behind-the-scenes footage.

Free admissions. Drop in, no reservations. 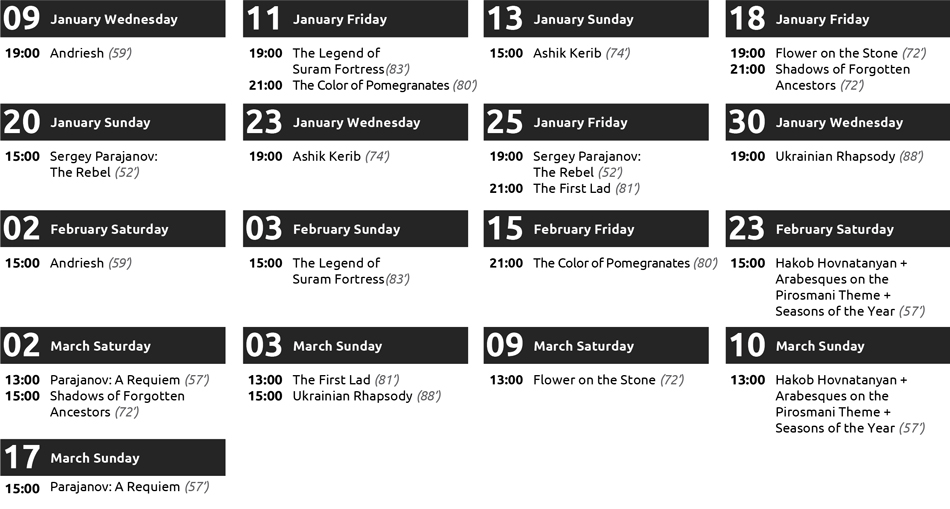 Flower on the Stone

The Color of Pomegranates

The Seasons of the Year

The Legend of Suram Fortress

Arabesques on the Pirosmani Theme