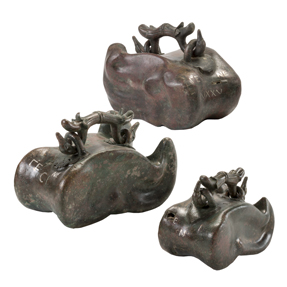 Weights in the form of Astragalus (Ankle Bone)

These astragal-shaped weights which form a set of three with a handle on top reveal an elaborate craftsmanship. The Romans introduced their own system of weights based on the libra to Anatolia. The denominational marks written in Latin and Greek indicates the numbers which correspond to their mass. According to the Roman system, one libra was equivalent to 12 unciae (libra of 327.45 g).

The astragalus is the talus bone in the heel of many mammals that has a rounded but cubiform shape. With its attractive shape, astragalus has been an inspiration for both secular and spiritual objects throughout history. Having been used as game dice in Ancient Greek and Roman cultures, it was also assigned to magical attributions. Astragalus-shaped objects can be found in bronze, lead, and glass as well as in other different materials.