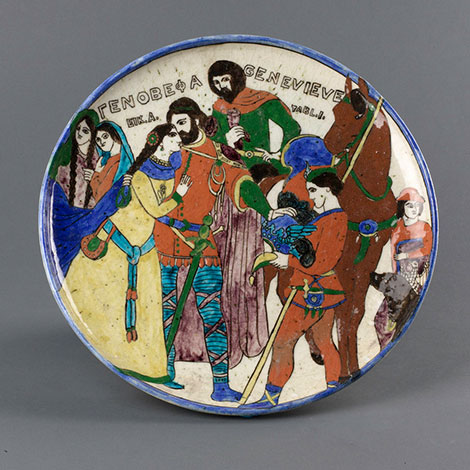 end of the 19th century – beginning of the 20th century

Slightly concave body and ring base. One of the series of four plates depict the story of Geneviève. GENEVIÈVE is written in Greek and Latin script on the top of each scene, and each scene is given a number. There are two Genevièves in Christian iconography.

The first is Geneviève of Brabant. This is a religious character whose romantic story and suffering has been depicted in poetry, plays, and paintings. Geneviève is falsely accused of cheating on her husband by a steward. Her husband orders her death. Howeveri those tasked with killing Geneviève decide against doing so and leave her on her own in the forest. Geneviève gives birth to a baby with the help of a doe and brings it up. Years later she meets with her husband as he is hunting in the forest. After her explanations her husband believes in her innocence. The slanderous steward is left to die and Geneviève returns home (Clemet 2004).

The second is St. Geneviève, the protector of Paris. She was born in Nanterr in 419, died in 512 in Paris, with 3 January dedicated to her. St. Germain of Auxerre and St. Lupus of Troyes left Gaul for Britain to fight pelagianism (Gregory 1991) in 429, and stopped at Nanterr, Geneviève’s village. They are welcomed by the villagers and St. Germain notices Geneviève in the crowd whilst he is preaching. Upon learning that Geneviève has dedicated herself to the service of God he tells her family that she will lead a sacred life; that a lot of young virgins will take her example and dedicate themselves to God. As he is leaving the village he gives Geneviève a medallion with a cross, blessing her and telling her to keep it as a reminder of her dedication to Christ. Leading a holy life in her village Geneviève moved to Paris after the death of her parents and lives with her godmother. When Atilla is about to attack Paris everyone panics and tries to flee. However Geneviève stops them, telling them that God will not grant passage to pagans. Following this, when Atilla does not attack afterall, Geneviève is accepted as the patron saint of Paris (Catholic Encyclopedia, Clemet 2004).

When the stories of the two saints are compared, the four plates in Pera Museum’s collection fit better with the story of Geneviève of Brabant, despite the fact that St. Geneviève, the patron saint of Paris, is better known. The plates are numbered to present the story in its entirety, depicted in a poetic manner. “ΜηνΑταστ?ηΑβρααμ ολου” is written at the back of the plates, in Greek script. The word “Abraamoglu” is legible, although the others are less clear. The story depicting the life of Geneviève of Brabant is European in origin, and these plates must have been produced on commission by Armenian or Greek masters from Kütahya.